Skip to content
Single Grain > customer acquisition > Geotargeting: How to Find the Right Customers for Your Brand

Geotargeting is a marketing tactic that uses geographical locations derived from a user’s IP address to serve city- or neighborhood-specific content or advertisements to them.

So if you’re a business and you’re running Google Ads, you’re probably doing geotargeting, either by state or zip code. But you may be missing out on a powerful option for advertising your goods or services: Nielsen’s DMA regions, which are the geographic areas in which local television viewing is measured by Nielsen.

If you want to maximize the buying intent of your audience – not to mention your ad spend – consider adding this powerful targeting option to the mix, as getting your targeting wrong is one of the worst mistakes you can make in advertising. If you’re spending ad dollars to reach the wrong people, then you’re throwing money away.

In general, there are two major ways that advertisers reach the wrong people. First, they set their parameters too broad, which means that you’re putting yourself in front of a lot of unqualified eyeballs – people who have no interests or behaviors that would indicate that they’d be a good potential customer for you.

On the other hand, you can also go wrong by making your parameters too narrow. This one may seem surprising, but when it comes to good advertising, you need good data. If your targets are too narrow, you’re missing out on an opportunity to learn about what works and what doesn’t. And if you get it wrong? You won’t see any results.

When Should You Use Geotargeting?

It’s hard to think of a situation where geotargeting wouldn’t be helpful, but there are some areas where it’s especially beneficial. For example:

These are just a few situations where geotargeting is an absolute must, but I still think anyone can benefit from it. Even if you’re a national brand, there are certain markets that you’ll do better in than others, and those preferences are likely to change over time. The more targeted your advertising is, the more you’ll be able to learn about your customers.

Along with other types of demographic targeting, location targeting can tell you a lot about where your message is resonating and that information goes beyond individual states or cities. For example, maybe you have an e-commerce company that gets a ton of business from North Carolina. You sell a lot in Raleigh but can’t quite crack Charlotte. Is it the city itself? The region? The messaging? You can learn a lot by honing in on specific areas to target campaigns.

How Does Geotargeting Work in Google Ads?

Google Ad Manager allows advertisers to “geotarget” – that is, to target the specific IP addresses of users in geographic locations. There are several options for geotargeting:

Most advertisers focus on zip/postal codes and states, but they’re missing out on a potentially powerful targeting option by ignoring DMA regions.

What Are the Nielsen DMA Regions?

Nielsen Designated Market Area (DMA) regions are based on maps created by the global measurement and data analytics company, Nielsen. There are 210 DMA regions in the United States, and each one is made up of counties that are grouped by television watching behaviors: 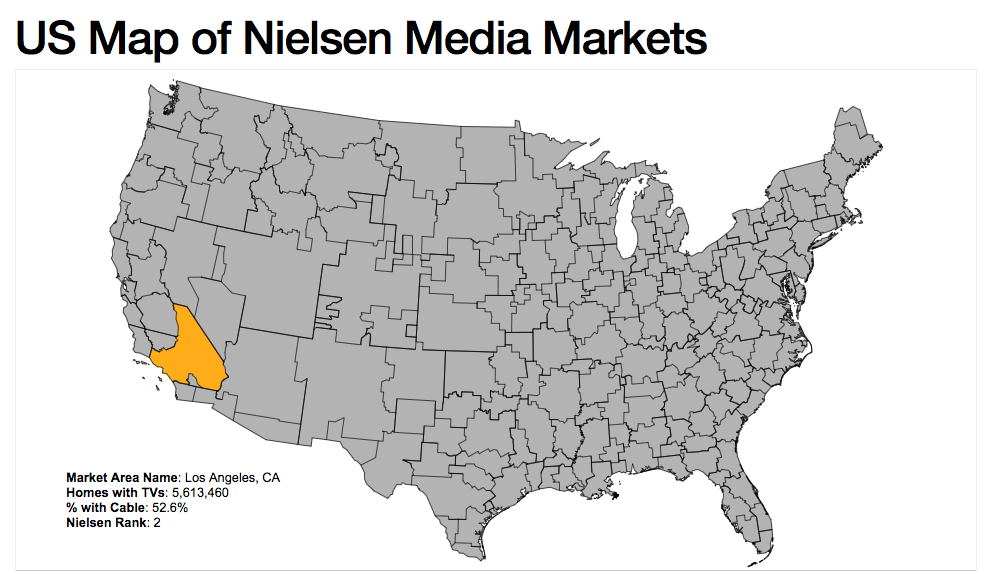 You might be thinking, “What do TV watching patterns have to do with digital marketing?” That’s a valid question, but it’s not just about television.

Back in the 1950s, Nielsen began surveying households on their TV watching habits and – this is the important part – correlated them with other factors, like market consumption data and demographic data, effectively creating the first-ever true marketing map of America. Instead of relying on state or even city borders, which mean nothing from a marketing perspective, DMA regions represent groups with their own specific marketing data points.

Nielsen partners with Google to provide these zones for geotargeting to advertisers free of charge. So there's no sign-up, there's no enrollment and there's no application – it's just there, natively, in the platform, and you can target it right now for any of your campaigns.

Nielsen is one of the last few Data Management Partners (DMPs) that work with Google and offer this sort of service for anyone to use, probably because there's nothing controversial about the DMA regions – it's just another way of looking at the map.

Let’s say there are specific cities in Ohio that you want to target in a Google Ads campaign. You want to hit Dayton and Columbus, but not Cleveland, Akron or Toledo. You could individually geotarget each city, but you’d be missing out on the areas in between. If you used DMA zones, you’d pull in everyone in that targeted marketing area.

As a real-world example, we were recently speaking to a Single Grain client based in Canada who wanted to target the entire U.S., but also emphasize particularly large and growing start-up tech hubs like San Francisco, Austin and Provo, Utah. Their initial thought was to target the states and/or the cities, but we told them to focus on the DMA regions instead.

The problem with targeting by state is that you’re covering too large of an area. Your message would wind up reaching people who are nowhere near the major technology centers – people who would never use your services.

If you target by zip codes or cities, then you have the opposite problem – it’s too narrow. What if the start-up employees you’re targeting live outside the city limits and commute to work? You’d basically be excluding people who live in the suburbs. They may see your ads while they’re at work, but not at home, which would cut down on your ability to retarget them. Plus, while they’re at work, they’re working (at least they should be!), not clicking on ads. 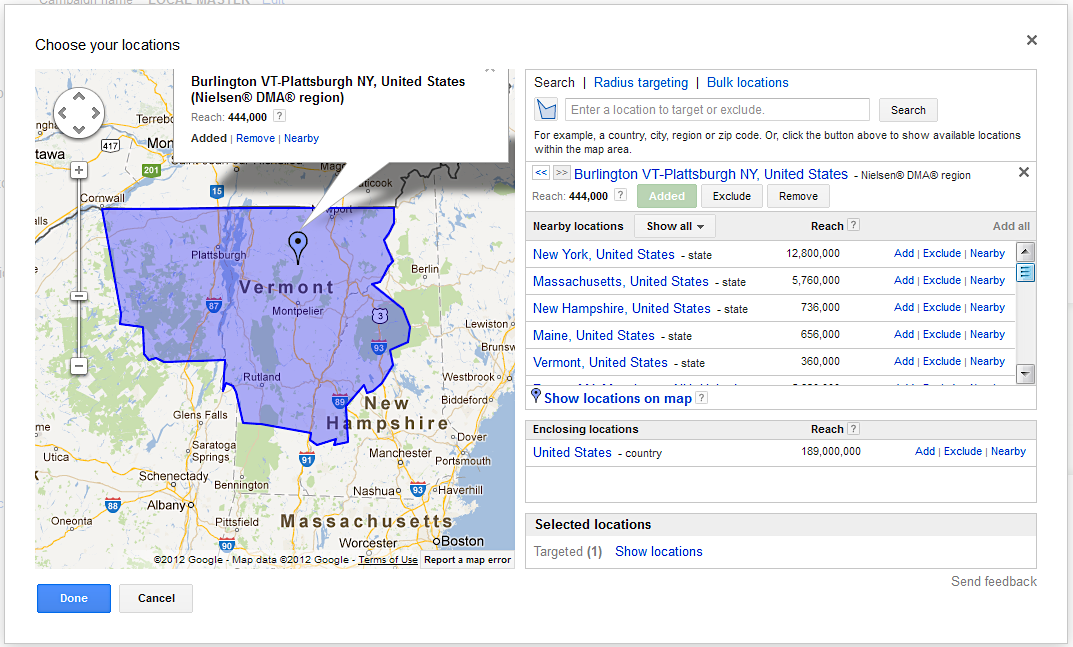 The Benefits of Geotargeting with DMA Regions

DMA region geotargeting has been our preferred method for national campaigns at Single Grain for the last few years. We've seen up to a 30% increase in geo-optimization efficiency just by switching to this model, versus state-by-state models.

These advantages can be attributed to four primary benefits of DMA zone targeting:

If you geotarget DMAs versus going deeper to look at counties, cities or zip codes, patterns will emerge much more quickly without getting lost in the weeds. While you can technically get more precision, you're going to be so inundated with data that you won’t be able to actually optimize effectively. The DMA zones are just a nice balance of size versus precision.

2) DMA Zones Are Grounded in Marketing and Consumer Data

State lines don't actually represent meaningful boundaries between dissimilar consumers. There's nothing inherently different about the way people on either side of the border between Colorado and Kansas shop. But Nielsen has found some overlap regions where there actually are differences. If you were targeting state by state, you’d miss out on that – and you'd have less precision in your targeting.

The big U.S. states can conceal dozens of different competing market trends that will obscure one another and overwrite your data with meaningless signals.

For example, more often than not, what works in Southern California isn't the same as what works in Northern California. The same goes for East Texas versus West Texas, and rural New York versus New York City. You're going to want to zoom in deeper and capture these changes, and there are patterns that you’ll miss if you're only looking state-by-state.

Nielsen updates their regions every two or three years in accordance with new data, revising their maps to reflect new and emerging market behaviors. When you think about some of the demographic shifts happening in states like Texas, it’s easy to see how targeting on a state-by-state basis might miss the nuance of current political, economic and social climates.

How to Set Up DMA Region Geotargeting

Setting up DMA targeting is easy:

Obviously, you don’t want to rely only on DMA targeting for your campaigns. You likely already know the other demographic information you want to target, and you shouldn’t just delete these criteria because of the potential that DMA zone targeting holds. Instead, layering DMA regions on top of your existing targeting means that you’ll be better able to find the right people, where they are.

When You Shouldn’t Use DMA Zones for Geotargeting

There are some cases where DMAs won’t work, however, that have more to do with how companies operate and sales teams are structured than with what’s best for the campaign.

For example, companies that employ a lot of sales people typically break their territories into regions, which are often divided along state lines. If a DMA zone cuts across regions, that may create a conflict for the sales team.

Another example is pharmaceutical companies, which have to abide by laws in different states regarding how they can advertise. New York and Pennsylvania may have completely different rules dictating prescription drug advertising, but parts of the two states may be in the same DMA region. In this case, it makes more sense to focus on a state-by-state strategy.

Finally, be aware that Google isn’t Nielsen’s only partner for DMA regions. Facebook also offers it as a geotargeting option. Layered on top of Facebook’s already extensive targeting options, it’s an efficient way to target the right people in the right location.

In Facebook, you set up DMA targeting when you’re creating your audiences. When you search for a location, some of them will be labeled “Market” and the location will have “DMA” after it. Select these as appropriate to further refine your targeting: 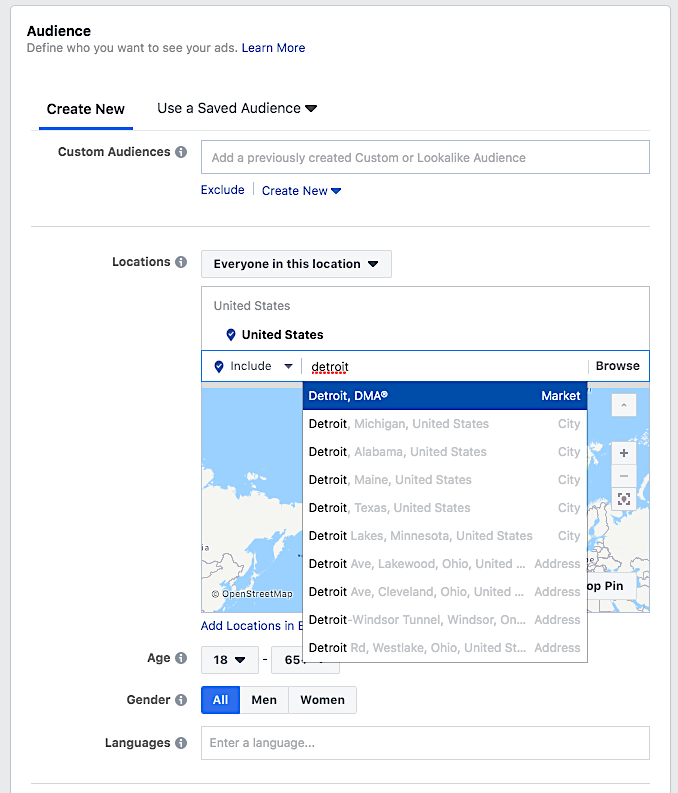 Getting Started with DMA Zone Targeting

Nielsen DMA zone targeting makes it possible to learn more about your customers and see how buying patterns are distributed across regions. It’s a potentially powerful tool for your paid ad campaigns, but I’m not just expecting you to take my word for it. Test it out.

The next time you’re mapping out a campaign for which you would have otherwise used state or zip code targeting, test Nielsen DMA zones instead. This approach has worked incredibly well for us and our clients – and if you give it a try, I bet it’ll work for you, too! 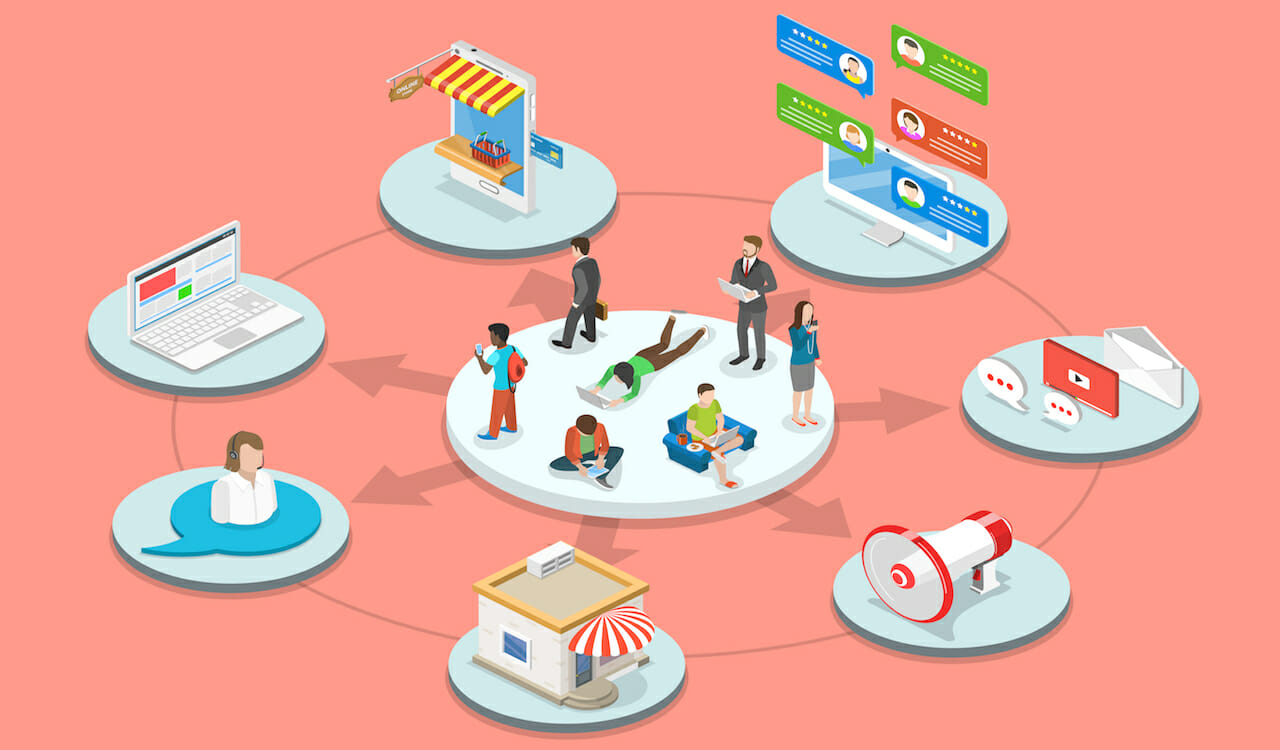 Devin Pickell • May 11, 2021
5 Tips to Build a Seamless Omnichannel Customer Experience
Share This Post
Popular Posts
31 Best Digital Marketing Campaigns You Can Swipe
18 Reasons Why Your Instagram Posts Fail (And What to Do About It)
10 Effective SEO Techniques to Drive Organic Traffic in 2021
20 Pre-Production Tips to Create Successful Video Content in 2021
54 Alternative Ad Networks to Open Up New Channels of Growth in 2021
30 Social Media Prompts to Get the Conversation Started
How to Create Instagram Stories Ads that Your Ideal Customer Will Swipe Up
Beginners Guide to Using Facebook Video Chat
42 Digital Marketing Trends You Can’t Ignore in 2021
17 Engaging Video Content Types that People Love to Watch