Daisy Jing, the CEO of Banish, the natural solution for problem skin, shares how she turned being a YouTube influencer to starting a skincare line, scaled her business to $3 million in revenue, and the importance of building an online community. 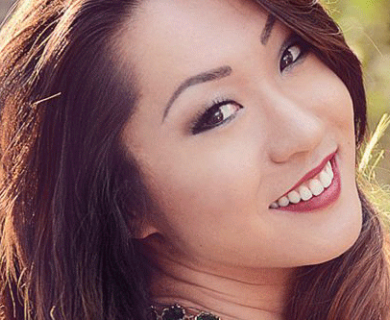 Daisy started acne product line Banish in 2013 out of her kitchen. Now the company has scaled to about 15 people and $3M in revenue.

I tell everyone that I would never have been able to start this unless I had my YouTube channel. I started reviewing skincare products on YouTube in 2008; I just started my channel because I had acne problems myself.

Check out one of Daisy's videos:

I was just this normal girl, in my dorm room, reviewing beauty products and I developed a following! It wasn't huge, but it was enough to get me enough trust, in terms of launching this product. The funny story is, when I started this business, I had no intention of starting it. It was very accidental. I did my YouTube channel. I had really bad acne, just wanted to help people with their skin problems and review products for them. I developed a following and a community.

And then, one day, I just started mixing stuff in my kitchen, used it on myself, and, within a few weeks, my audience started noticing. “Oh, Daisy, your skin looks so much better. The red marks on your face is gone. Where can I buy whatever it is you're using?” Then my mom started noticing, too.

I made a few batches, but it in bottles, shipped it out USPS. That's how it started.

I really do believe it's the story. It's my community and my videos that really helped grow this business and even give the first initial thousand orders. Without the YouTube, nothing would have happened.

There's a video where it's called, “Growing Up Ugly“. That has, I think, like 200,000 views. That was very … It was an accident. I just made it one day, Friday night. That was when I had the acne problems.

I feel like that video was so vulnerable, and I was so raw about my struggles with my skin and my appearance, that I feel like a lot of people related to me and trusted me. I think in skin care, and in cosmetics, and in beauty, you just want trust. There's just so many products out there. You want to be able to trust whoever is making or using it.

I feel like that was a huge source of credibility for people to trust a product.

How Daisy Works With Influencers

We use influencers to promote Banish with their own organic content. We find other people who have a similar story to me and want to share their advice on their skin care, skin care tips, or however they manage their acne.

When I'm looking at what role I want to play in a company, I never wanted to be a YouTube celebrity. That was never my intention. I just wanted to be a trusted source of information to help people with their skin and their confidence.

I figure that I want to be the person running the business and I will try to tear myself away from being the face of the business.

When I was first starting out, I was crazy. I spent 50, 60 hours a week doing this because I didn't make any money from the YouTube either. I was hustling, making up content. I would think about what new products are launching. Can I go to the drug store and get that product before anybody else does and do a review on it?

I really think you have to be crazy persistent. It's taken me, what did I say, 2009, eight years to get to where I am now.

I think you have to keep doing it. You have to love it so much. I don't really know what drove me to work so hard in the beginning. I really think it was because I formed a bond with my audience. We all shared this commonality of being a little insecure about the way we looked and our skin. That pushed me to keep making content, even though I wasn't making money from it, or even though it took a lot of my time.

It becomes a lot easier. I think collaboration is important. Once you reach a certain amount, people want to collab with you. They're not going to collab with someone who's just starting out. That also helps.

How She Leveraged Her Community to Acquire Her First Thousand Customers

I really believe it was the community that helped me acquire my first customers. I think all my thousand customers came from the YouTube channel and because they knew me. I really didn't think it was going to take off. I was doing all this myself. I remember buying all the bubble mailers from Office Depot, and buying all the bubble wrap from Target, and they'd be sold out of it.

It was all through my community. It was funny, because they would also email me and call me. I would pick up the phone. They were like, “Wait. Is this the same girl? Is the same Daisy I watch on the YouTube videos?” Like, “Yep.”

In terms of the next, maybe 10,000 customers, or whatever, it was more through … I had some friends who are also influencers, as well. I sent them the products and then they reviewed it. It was reaching my network to get them to review it.

Wwe have a pretty rigorous system of how we do it. I don't think it's as easy as sending people products and expecting them to review it. I think the biggest thing is you have to look for people who aren't big yet, because once they get big, they get very expensive.

We've noticed that you don't necessarily get an ROI if you work with someone who's very established. We try to work with people when they're smaller and build a relationship with them. Sometimes, they'll blow up. That's how we do it.

I'm also very good at spotting influencers. When I watch a girl on YouTube, or I see her on Instagram, and I notice she has that spark that will allow her to grow and blow up in the next year, I do whatever I can to contact her and make sure that we're able to work with her.

We want someone who's very relatable, funny. I think she has to be a little aspirational, too. She has to be that person that people want to be, but at the same time, relatable. There's that fine balance.

Customer Acquisition: “Figure Out What You’re Good At And Stick With That.”

The influencer metrics I follow are mostly engagement rates. Also, a huge part of it is, is he or she known for being sponsored? If she's known as a Kim Kardashian, just being sponsored all the time, that's probably not going to be beneficial for a small company.

We have a lot of repeat customers, so that has helped. It's not a huge struggle and always direct response marketing. We've been toying a little bit with Facebook now, I really think it's like, figure out what you're good at and stick with that.

I feel like you just have to pick that one thing and really tweak it, so that way you know how to work the system. For me, I can't do … I tried affiliate marketing. It didn't work. I lost money on that, so figure out what it is that you're good at. Stick with it.

Free download:Many of the influencers we mention make their money on YouTube. If you want to generate revenue from YouTube, more specifically YouTube advertising, get this quick start guide! Get it now!
We’ve helped Fortune 500 companies, venture backed startups and companies like yours grow revenues faster. Get A Free Consultation

Shane Barker • Apr 15, 2020
7 Ways Influencer + Social Marketing Can Help During COVID-19 [Infographic]
Share This Post
Popular Posts
31 Best Digital Marketing Campaigns You Can Swipe
18 Reasons Why Your Instagram Posts Fail (And What to Do About It)
10 Effective SEO Techniques to Drive Organic Traffic in 2021
20 Pre-Production Tips to Create Successful Video Content in 2021
22 Alternative Ad Networks for Best PPC Conversions in 2021
30 Social Media Prompts to Get the Conversation Started
How to Create Instagram Stories Ads that Your Ideal Customer Will Swipe Up
Beginners Guide to Using Facebook Video Chat
42 Digital Marketing Trends You Can’t Ignore in 2021
17 Engaging Video Content Types that People Love to Watch