When you’re first starting out with content marketing, you can usually fly solo. It’s easy for one person to write a couple blog posts or film a few Facebook Live videos for your feed.

But pretty quickly, you start to notice that scaling up your campaigns takes more time than you have available – especially if you’re adding content creation to an already-full plate. If you’re an entrepreneur, for example, content creation is only a fraction of your responsibilities. You’re also responsible for accounting, customer service, product development and everything in between.

If you’re ready to build a content marketing team, but not sure where to begin, read on. In this article, I’ll share what the content team at Single Grain looks like, how it got that way and how you can build the team that’s right for your company and its content goals.

For reference, here’s our current publishing calendar at Single Grain:

Add that all up, and it’s about 43 pieces of content per week. No way could I do all of that on my own – that’s why I have a content team working behind-the-scenes to help me. Here’s what that looks like right now:

I think it’s important to note that these aren’t all full-time positions. A few of them are, but most of the writers we work with are contractors, so it isn’t as if our content team is 7-8 full-time employees.

For comparison’s sake, Neil’s team looks very different than mine. In part, that’s because he publishes much less content. Currently, Neil publishes:

Neil’s team also creates several social posts, but he doesn’t count them since they’re mostly just links back to his blog. That’s a total of just 13 pieces compared to my 43. And it’s not that more is better. But it does influence how he’s built his team.

Because so much of Neil’s content is created by internal team members, he considers his content team to only include the contractors who work on his videos and podcast episodes.

Clearly, there are plenty of different ways to build a content team. Mine team is larger than Neil’s, for example, because we’re trying to be really aggressive with content right now.

While we’re testing our content sprout model, we want to get to a point where we’re hitting 40-50 pieces of content per day, just so that we can see what sticks. We’re also continuing to see website traffic growth of 20-30% month-over-month, so we want to publish enough that we’re able to maintain, or even grow, that rate.

That sounds like a lot, but even if we hit that mark, we’ll still be behind Gary Vaynerchuk, whose 20+ person team is currently producing between 80-100 pieces of content each day: 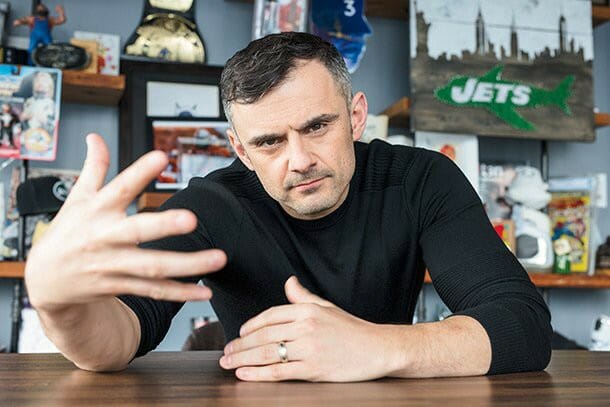 Before you even start thinking about building a team, take some time to figure out what you’re trying to achieve with content.

Neil, for example, wants to use content to grow his personal brand and to share his own stories. In that case, growing his team doesn’t make much sense. Content creators aren’t mind readers, so the time he’d spend telling his stories to them is time he might as well spend just writing his own content in the first place.

In my case, I’m trying to build not just my personal brand, but the brand of Single Grain. I have to be able to scale, because there’s no way I could handle the volume of content needed for all of these different campaigns on my own.

You might fall somewhere in between. One of the best ways to figure out what you’re trying to build is to look at your competitors. Who’s doing content really well? Whose name do you keep seeing pop up everywhere you want yours to be? You can learn a lot from what they’re doing.

If, for example, you see them publishing weekly blog posts on their sites, plus guest articles on industry websites, plus social media and more, you can pretty reasonably conclude that you’ll need to sustain a fairly high content volume as well. But if, like Neil, all you’re trying to do is build a name for yourself, you might be able to achieve the results you want with just a few pieces of content every week.

Regardless of what you’re trying to build, when you first start building your content team, you probably aren’t going to hit 80-100 pieces per day. You may not even hit 8-10 pieces per month. But it’s ok to start small.

When I first started the content marketing program at Single Grain, we literally only had one writer who was cranking out all the content for us. I would tell her, “We want to 2-3 blog articles,” and she would write them all. We didn’t even have a social media person back then.

But we slowly built from there. We started adding contractors, because we needed the flexibility, and then we decided to build out the full-time team we have today. Growing in that way required a lot of attention to collaboration workflows and culture. I love that part of building a team, but I know not everyone wants to be involved at that level.

Speaking of contractors, one strategy that Neil and I both rely on heavily is using contractors for content creation. It’s not that we don’t have the budget for full-time workers. It’s that modern content creation requires so many different skill sets that it’s often to your advantage to find people who are specialists in each area that you can tap into as needed.

I’m in L.A., and if I wanted to hire a digital copywriter, the median salary I’d be looking at paying is nearly $75K: 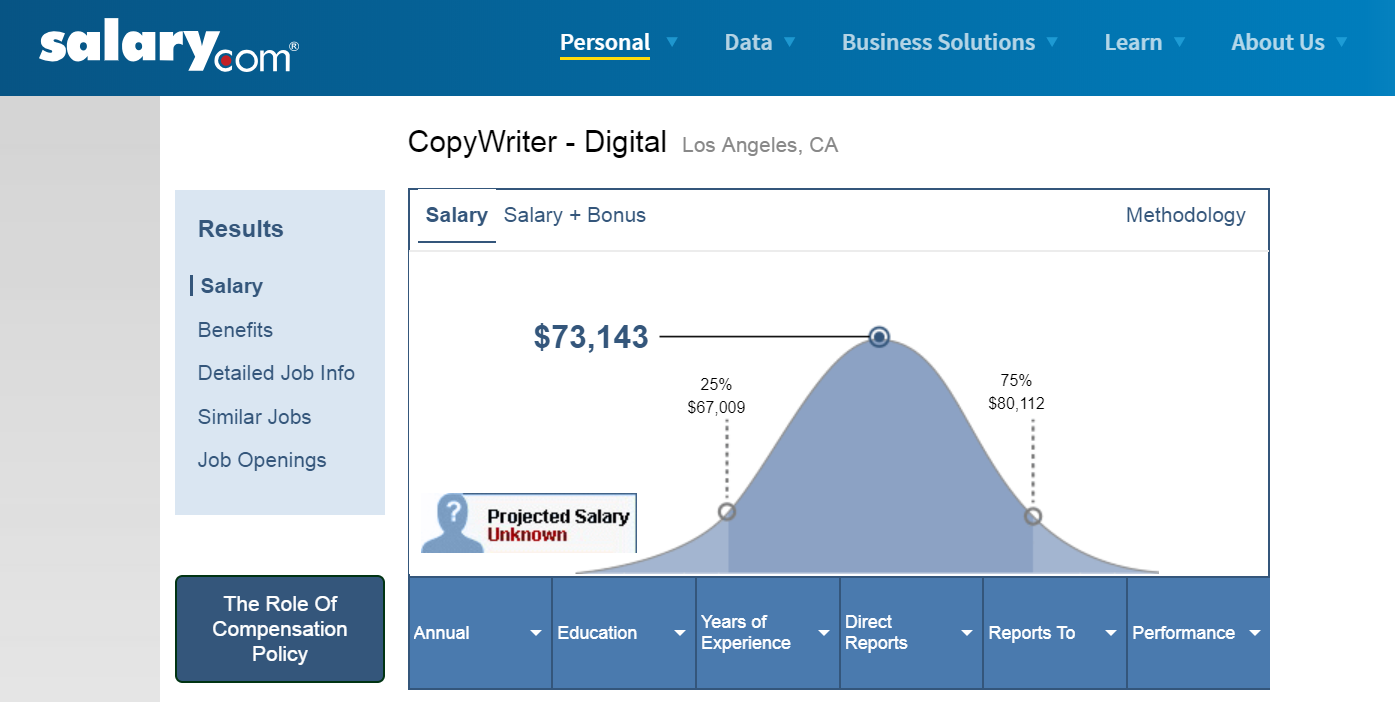 Maybe that salary is fine, but if I use it to hire a copywriter, I’m not getting someone who can film and produce videos for me. Or someone who can manage podcasts. Or even someone who’s specialized in social media.

And what happens if, six months down the road, I decide that I want to shift my focus away from written content entirely? Now, I’ve got a copywriter on staff whose hours I can’t easily shift over to other marketing channels.

Could I find someone who checks multiple boxes and who can work effectively on multiple channels? Probably. But I’d much rather invest in working with people who are at the top of their game, and save my budget for full-time hires for people in logistics roles who I know will be able to support the company long-term.

If you’ve never hired before – whether contractors or full-time employees – the process can feel overwhelming. After all, you’re about to place the content creation that’ll influence perceptions of your company’s brand into someone else’s hands. Of course that feels scary.

However, there are a few shortcuts I’ve found from my years of hiring that’ll help you grow your team successfully, no matter what size or scale you’re going for.

1) Start with a Single Role

Even if you want to end up with a large team, focus on getting a single role filled before moving onto the next position. For instance, say that you know blogging is going to factor heavily into your content campaigns. Start your search looking for writers. Once you have your writers set up and trained, you can expand to start looking for videographers, social media specialists and whatever other roles you need filled.

Try to take on too many searches at once and your split focus might mean that you don’t give each search the attention needed to find the right person, not just one who’s “good enough.”

Good referrals cut down your recruitment process significantly. Instead of having to post a job, review candidates and then make a decision, you’re being handed someone you know will be able to get the job done for you.

As an example, Sarah Rickerd – the writer who helped me kick off Single Grain’s content marketing program – came as a referral from Neil. For whatever role you’ve decided to fill first, ask around. Your colleagues, former coworkers or any marketing groups you’re a part of may be able to help.

Unfortunately, it’s easy to lie in a hiring process. I’ve brought on writers whose portfolios were stellar, but whose actual work in the position wasn’t nearly as good. It’s unfortunately common for these contractors to include work samples in their portfolios that have either been heavily edited by professional editors or outright written by others.

The only way to avoid these minefields is to give contractors a paid work sample test. And yes, you have to pay them. Not only does that keep you safer according to labor laws, but failing to pay for work can earn you a bad reputation among contractors (and yes, they do talk to each other).

Trust me, it’s a lot worse to bring on a contractor that ultimately isn’t the right fit than it is to arrange an appropriate test in the first place. Once you know who you want to hire, take the time to make sure you’ve filled the position with the right person.

Only after you’ve identified the role content will play within your broader marketing strategies will you be able to identify and fill the positions needed to bring it to life. 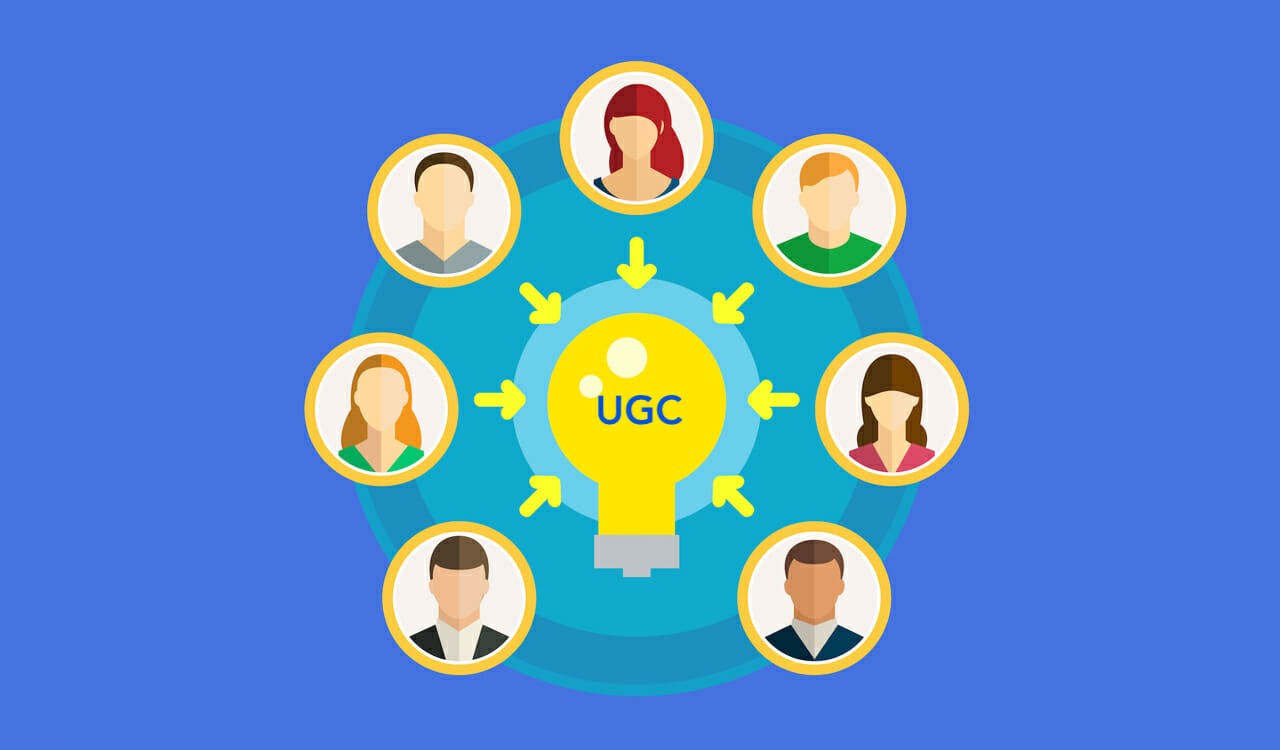 Chris Starkhagen • Oct 25, 2022
7 Smart Reasons to Include User-Generated Content (UGC) in Your Marketing Strategy
Share This Post
Popular Posts
31 Best Digital Marketing Campaigns You Can Swipe
18 Reasons Why Your Instagram Posts Fail (And What to Do About It)
17 Effective SEO Techniques to Drive Organic Traffic in 2023
20 Pre-Production Tips to Create Successful Video Content in 2023
22 Alternative Ad Networks for Best PPC Conversions in 2023
30 Social Media Prompts to Get the Conversation Started
How to Create Instagram Stories Ads that Your Ideal Customer Will Swipe Up
34 Digital Marketing Trends You Can’t Ignore in 2023
17 Engaging Video Content Types that People Love to Watch
SPEAK WITH AN EXPERT
Great marketing is tough. That's why we're here.
Read this next
Eric Siu • May 22, 2019
The Ultimate Guide to Link Building with Content for SEO
Previous Article
Eric Siu • May 21, 2019
How to Use Success Gaps to Get More Clients
More like this
Eric Siu • Aug 19, 2016
This Week in Growth: 5 Marketing Bullets 8/19/2016
Eric Siu • Jun 12, 2017
The Best Places to Find Freelancers For Your Business
Eric Siu • Sep 15, 2020
The Best Way to Track Your Keyword Rankings in 2023
Peter Boyle • Mar 1, 2016
The Ultimate Recipe for Effective Customer Lead Generation
Eric Siu • May 5, 2016
21 EPIC 10x Content Marketing Examples We Can All Learn From
Latest Posts
Justin Caldwell • Jan 25, 2023
GetResponse Review: Is It Worth It in 2023?
Joydeep Bhattacharya • Jan 23, 2023
PPC Consulting: Why It’s Essential for Business Growth
David Borgogni • Jan 18, 2023
Hostinger Review: Is This the Best Web Hosting Provider in 2023?
Joydeep Bhattacharya • Jan 16, 2023
100 SEO Statistics That’ll Help You Dominate Search Rankings in 2023
Joydeep Bhattacharya • Dec 23, 2022
Best Advertising Agency: Top 10 Choices for 2023
Back to our blog