Skip to content
Single Grain > business owner > Your Business Is About to Fail. What Should You Do?

When I purchased Single Grain back in 2013, it was on the verge of failure. 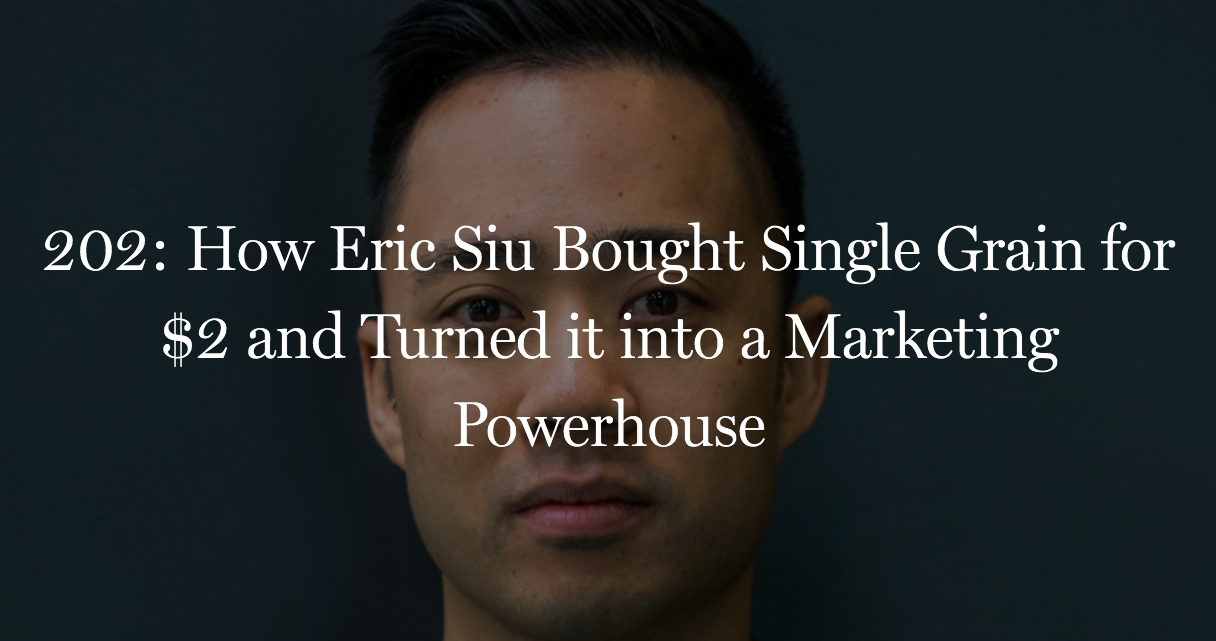 The recent Google Penguin update had practically neutralized the strategies the agency was using. Between that and some bad hiring decisions, it was losing customers left and right.

Taking over the agency didn’t magically turn things around. In fact, it was close to failure for nearly an entire year after that while I put out fires and tried to rebuild both the company’s customer base and the marketing techniques it was using. It wasn’t easy, but if you’re in that position now – where your company is close to failure – know that I’ve been there. I know what it feels like to stare failure in the face. But I also know what it takes to get out of that situation.

So if you’re struggling and failure is on the horizon, here’s how to come up with your own data-driven failure prevention plan using the same approach I used.

Potential failure is scary. It wakes you up at 3 a.m. and it haunts every action you take during the day. But worst of all, it puts you at risk of making emotional decisions, rather than logical ones.

To avoid making unsound decisions that are grounded in fear, you need a plan. There are lots of ways to do this, but one of the best is the if/then scenario planning framework developed by Vinod Khosla, founder of Sun Microsystems, Inc.

According to Khosla, “The goal of if/then scenario planning is to better understand how you can manage your company’s spend and ensure capital efficiency in order to achieve success.” Five core principles drive Khosla’s approach:

I’ll share an example of Khosla’s planning in action later in this article. But since you can’t put together contingency plans until you know what you’re working with, your first step has to be getting a good handle on your numbers.

Ideally, you should know your business’s numbers whether or not you’re facing failure.

To help you figure out where you stand, I’ve broken common business expenses down into the different categories I used when I was planning how to save Single Grain. But I’m not a CPA. This isn’t the final word on business expense breakdowns. Use it as a starting point, but customize it as needed based on your situation.

Before we get into expenses, plot out your projected income. Map out:

Try not to be overly optimistic here. If you haven’t even started the fundraising process, for example, don’t put an estimated seed round on your list just because you think you might be able to pull one off. Similarly, don’t assume that your existing customers will stick around forever. Look at contract dates if you have clients on retainer, or consider your churn rate if you’re measuring MRR or ARR to be as accurate as possible.

On the expenses side, the team you’ve built usually represents one of your largest cost centers – according to Paycor, it can represent up to 70% of total business costs when wages, benefits and related taxes are taken into consideration. This is especially true if you’ve gone out and built a rockstar team to help fuel your company’s success (those rockstars don’t come cheap, after all).

Yes, you can cut your human resources costs through layoffs. But I like to think of that as an absolute last resort. Other options include:

Obviously, you need to be conscious of any contracts you’ve signed that could prevent you from making these changes. You also need to be aware of employment law – especially laws that govern when workers should be classified as employees versus contractors (it’s not usually as simple as turning someone from an employee to a contractor and having them do the exact same job).

Generally speaking, your capital expenses are physical assets that you’ve purchased and expect to use for more than a year. Desks, chairs and computers fall into this category, as well as office space, if you’ve purchased your building.

To reduce these expenses, could you sell your space and move to a smaller building (or sublease an unused part of your space if you can’t move)? Could you buy PCs or refurbished computers for employees, instead of new MacBook Pros? Are there extra items you aren’t using that you could sell off? If you wind up cutting staff, any physical items they were using become fair game as well.

CapEx isn’t just about past purchases, though. It’s also about projected spend, including any equipment you’re under contract to purchase in the future. If you have future expenses you’ve committed to – whether capital expenses, marketing expenses or anything else – take a good look at your contracts and see what, if any, options exist for you to terminate the purchase and recoup money you’ve already sent.

Learn More: Some of My Biggest Marketing Failures (And What You Can Learn From Them)

Businesses often fail when they try to do too many things. So if you’re in this position, it’s usually best to go back to the basics and pause any research and development (R&D) resources you’re putting into developing new products or services.

That sounds counterintuitive. When you’re failing, it’s tempting to want to try a hundred different things, just so that one will stick and turn things around. But when you try to get too crazy or too advanced, your attention is often split away from the things that made your business work in the first place – and that’s often where you need to be focusing if you’re going to recover.

So take a look at your different products, services and business units. What’s really working for you and what isn’t? Are there products or service offerings in development that you can press pause on until your business recovers? How can you get back to the offering that originally made you successful?

Next, take a look at your remaining operating expenses, including everything from the smallest Post-It note up to the largest contracts you have with external vendors.

Operating expenses are your costs of doing business, outside the cost of producing any goods that your company sells (excluding capital expenditures). Depending on your business’s structure, this could include:

Don’t leave COGS (your cost of goods sold) out of the equation, either. If you think creatively, you may be able to find cheaper ways to produce your product or deliver your service without compromising quality.

Last up, extend your analysis outside of your business to your personal requirements. A lot of business owners don’t do this, but it’s huge. Imagine that your worst-case scenario shows that you’re going to be short $100K at the end of the year, based on your current spend. If you have to take $100K out of the business to cover your personal expenses, you’re going to be in a much worse position than someone who can live comfortably off of $25K.

There’s no right or wrong here. If you’re the sole breadwinner for a family of four in a high cost of living area, your expenses are always going to look different than the requirements of a recent college grad who can bootstrap a startup from a garage, eating ramen all day.

But for the purposes of this exercise, figure out how cheaply you could afford to live. Examine your assumptions about the things you “have to have.” There’s almost always a way to live cheaper, if you’re willing to temporarily sacrifice some comfort.

Learn More: The Startup Story You Didn’t Hear About: The Billion Dollar Company That Was 4 Days From Going Bankrupt [podcast]

Putting It All Together

Once you have a good understanding of both your numbers and how much flexibility you have, it’s time to put your if/then plan together.

Khosla suggests getting as detailed as you can with your scenarios, using decision trees so that logic can guide your decisions – not emotions. Here’s an example he shares of EcoMotor’s Milestone Matrix: 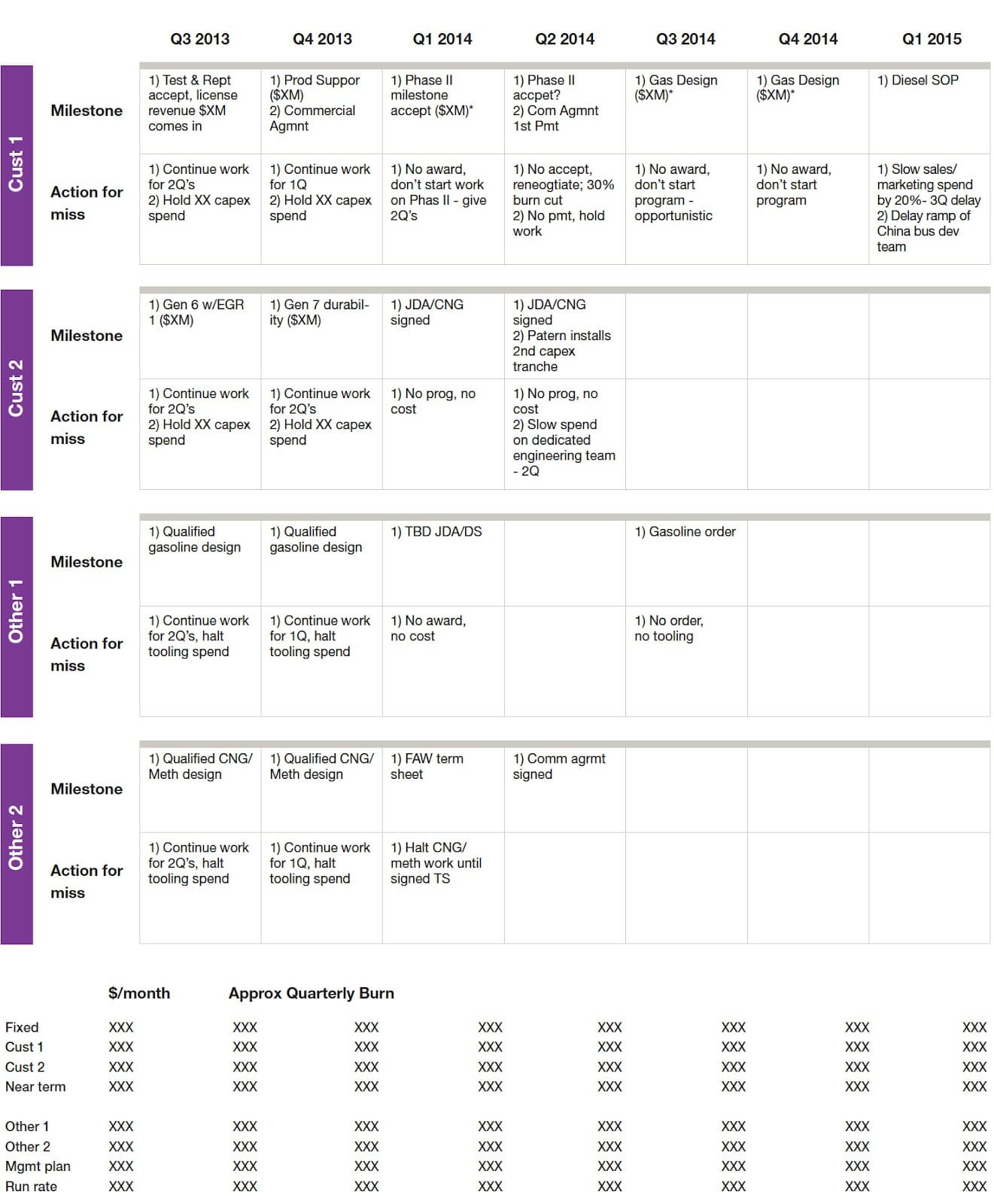 Pay special attention to the “Action for miss” sections here. Essentially, the matrix is saying, “If we don’t hit [X] within the specified time period, we do [Y].” Developing a defined road map like this takes time, but when things go south, it takes unnecessary back-and-forth out of the equation so that you can move forward more confidently.

Using a combination of Khosla’s approach and other contingency planning frameworks, I was able to work out three possible scenarios, based on my numbers:

Through this process, I gained a better understanding of what Single Grain would look like if everything really fell apart. And then, because I had a worst-case scenario in mind, I was able to use that as a baseline plan for what I’d have to work with in my normal- and best-case scenarios.

Also, Khosla’s chart doesn’t include this, but one thing I’d recommend adding to your personal if/then plan or milestone matrix is a shut-off point. When do you pull the plug? It’s a fact of life that businesses fail. And while I hope yours isn’t one of those statistics, I also think it’s better to exit a failing company before you’ve completely bankrupted yourself.

Learn More: How to Market Your Startup When No One Knows Who You Are

One last tip I want to leave you with is: as you’re going through this process, watch out for personal biases and emotional reactions. When your company is failing, there can’t be any sacred cows. Every dollar you spend and every choice you make has to support your recovery – no exceptions.

At Single Grain, pulling the company back from failure meant making incredibly hard choices. It meant laying off employees I cared about, shutting down unprofitable programs that customers appreciated (but that weren’t pulling their own weight) and cutting spending down to the bone. Pretty much all I did was hunker down and dial for dollars until I was able to get the company back on a solid footing.

Obviously, that effort was successful, and I’ve since been able to add back staff and expenses as Single Grain has grown to support companies like Uber, Amazon and Salesforce. I hope the tips and strategies I’ve shared here mean that I’ll see you on the other side as well! 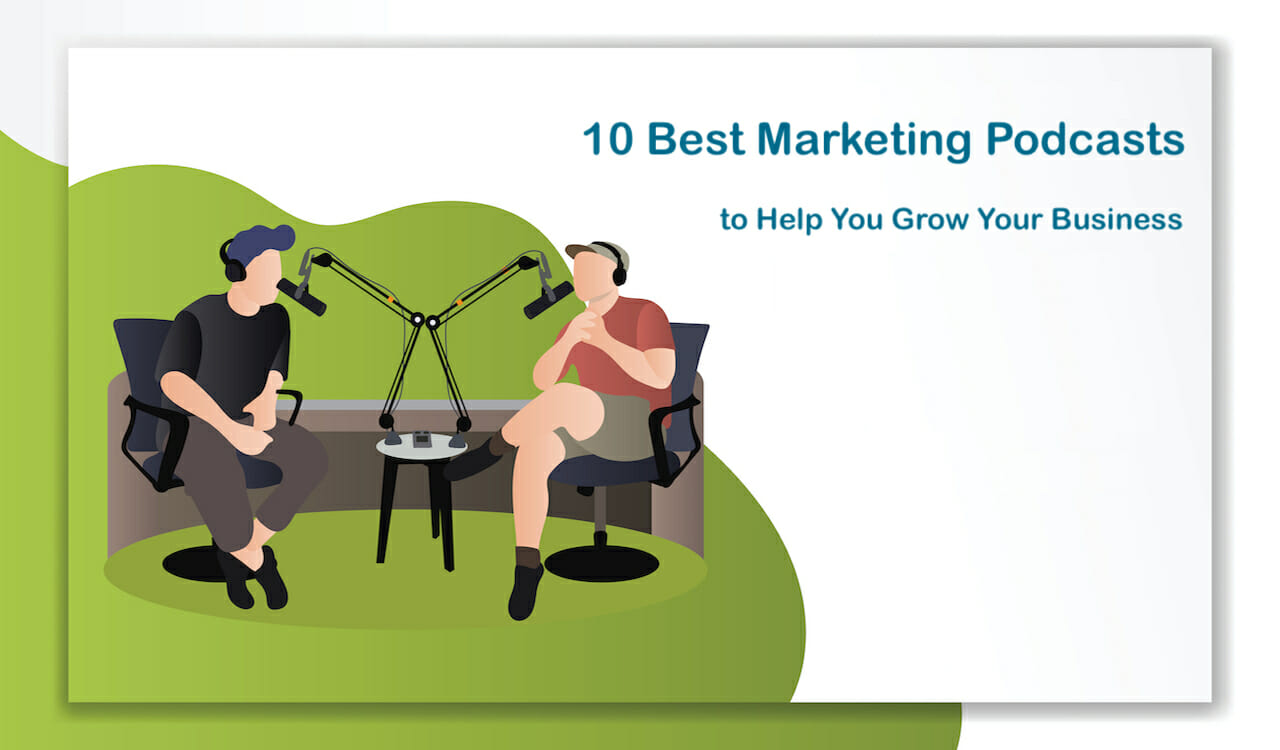 Sawailal Jangid • Oct 7, 2019
10 Best Marketing Podcasts to Help You Grow Your Business
Share This Post
Popular Posts
31 Best Digital Marketing Campaigns You Can Swipe
18 Reasons Why Your Instagram Posts Fail (And What to Do About It)
10 Effective SEO Techniques to Drive Organic Traffic in 2021
20 Pre-Production Tips to Create Successful Video Content in 2021
54 Alternative Ad Networks to Open Up New Channels of Growth in 2021
30 Social Media Prompts to Get the Conversation Started
How to Create Instagram Stories Ads that Your Ideal Customer Will Swipe Up
Beginners Guide to Using Facebook Video Chat
42 Digital Marketing Trends You Can’t Ignore in 2021
17 Engaging Video Content Types that People Love to Watch