Well, I have died, been fired and praised numerous times but I keep signing back in… 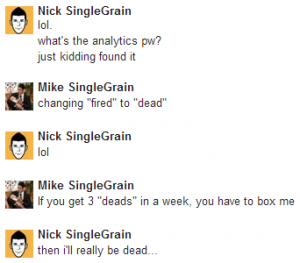 It’s been a summer of growth. Not in terms of the number of emails account that I check daily, although that number has grown, but with my social media skills.

This internship has been a true testimony to social media and networking.

I came across this opportunity via a tweet from @TheMikeBal (Single Grain’s Social Media Director). I had tweeted him before about random drumming things and, the next thing you know, I see him posting an internship opportunity. I felt like this would be a huge boost for my experience, so I applied and got an interview right away. An hour or so later, Mike emailed me asking me to join the Single Grain team for a summer! I was ecstatic! A college kid, working for a company out in San Francisco was nowhere near what I had planned for this summer – but bring it on!!

It has been a super-fast summer and I’d like to blame Single Grain for that – although it’s not a bad thing at all! I think working in social media makes the days move faster, because you’re always planning for the day ahead of you. Besides planning ahead, the internship flew by because it kicked-ass.

Here are the top three reasons why my Single Grain internship kicked ass:

1. “Started from the bottom now we here”

The project that I worked on this summer started from the bottom. Single Grain has a handful of clients and the two that caught my attention was Chef Works and Aprons.com. Chef Works already had a pretty established Facebook page and we understood the type of content they enjoyed. For Aprons.com, this was not the case.

Aprons was my project for the summer. When I picked up Aprons.com's social media accounts, there weren’t more than 400 Facebook Page “Likes” and engagement was very low. Obviously, food was the broad category, but the big challenge was figuring out what their audience wanted to to ‘feast’ on. One day, it clicked. Food “hacks.” Ever since that day, Aprons.com's social accounts have been on top of their game. It has been such a rewarding experience to see my work actually at work. As Drake would say, “Started from the bottom, now we here”.

Yeah, that quote is from a Disney classic, “Mulan”. If you think about it though, it ties in perfectly with what I’ve experienced. I have never been part of something that grows so quickly. Single Grain keeps adding amazing new people to the team and they’re all key players that are responsible for growing us into an amazing company.

Even as an intern I got to make a difference:

I can’t wait to see what the future holds for Single Grain, but whatever it is, ya’ll better watch out!! 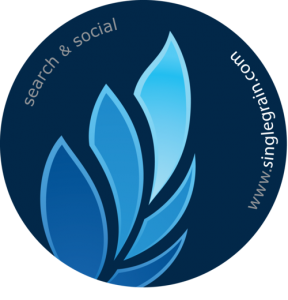 I don’t think I could have made a better connection on social media than the one I made with Mike Bal. Through him, I've had a great opportunity to grow in something that I absolutely enjoy doing. I’m very thankful for all that he has done for me.

Throughout the summer, Mike and I met up and worked together about once a week, and during those times, he's taught me SO MUCH. I’ve learned:

He’s also a great mentor when it comes to side projects and making sure you get the most out of what you’re working on. Yeah, I’m fired, and “dead” by him, but it’s all fun (seriously, don’t get too worried about me). I’m looking forward to working more with him as the year goes on.

All in all, it has been a great summer of social media experience and I’m excited to continue with the team in the fall as a part-timer! 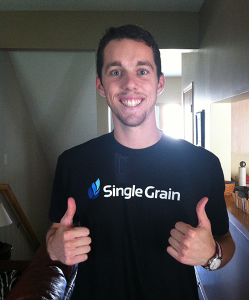 Read this next
ericosiu1 • Sep 4, 2013
Time To Check Your Facebook Vitals: You’re Flatlining!
Previous Article
Danny Tran • Aug 6, 2013
The Evolution of Google SERPs
More like this
Maria • Apr 1, 2011
Friday Night Links: See and Be Seen
Eric Siu • Jul 29, 2019
What Are the Best Blogging Platforms? (From Free to $$$)
Eric Siu • Dec 10, 2012
Are You Making These Social Media Marketing Mistakes?
Maria • Apr 18, 2011
12 iPhone and Android Apps for Marketers
Eric Siu • Dec 6, 2011
How to Build a Following on Your Blog
Latest Posts
Single Grain Team • Oct 18, 2021
Influencer Marketing Strategy: The Ultimate Guide to Growing Your Business with Brand Partnerships
Eric Siu • Oct 15, 2021
How to Create a Powerful Marketing Funnel Step-by-Step
Joydeep Bhattacharya • Oct 12, 2021
What Is a Content Optimization Tool and Why Do You Need It?
Joydeep Bhattacharya • Oct 11, 2021
9 Examples of Storytelling Marketing to Inspire Your Next Campaign
Joydeep Bhattacharya • Oct 5, 2021
12 Best SEMrush Alternatives for Ranking Your Content
Back to our blog
Thank you!
You’ll be hearing from us very soon.
Close Visit SingleGrain.com
Get started in 1 minute → Keep goin’! Start my free consultation