Skip to content
Single Grain > Advertising > Google Privacy Sandbox: What Does It Mean for the Future of Targeted Ads?

In an effort to streamline a bloated digital advertising infrastructure and help create a new set of user privacy-focused open web standards, Google has announced that it will be ending support for third-party browser cookies in its Chrome browser by 2022 with its Privacy Sandbox.

On the face of it, this decision seems to be a positive solution to the many user privacy issues engendered by third-party cookies and a continuation of a trend already seen in other major browsers.

However, despite the collaborative approach taken by Google and the lengthy proposed timeline for finding a replacement for third-party cookies that suits individual users, digital advertising and publishers, the announcement has been met with some skepticism and trepidation.

Chrome is the most popular browser on the market. Moving away from the targeted ads enabled by third-party cookies could replicate the drop in ad revenue and B2B MarTech companies’ share prices that followed Apple’s implementation of intelligent tracking prevention in Safari.

Given these seismic changes, many publishers and advertisers are left to wonder: What does this mean for the future of targeted ads?

Related Content: How Apple’s iOS 14 Release May Affect Your Ads (& What to Do About It)

The Privacy Sandbox “is a collaborative effort to develop new web technologies that will improve people’s privacy protection and maintain existing web capabilities, including advertising, keeping the web open and accessible to everyone.”

Google's Privacy Sandbox will restrict tracking people across the Internet, enable publishers to build sites that respect people's privacy, and do away with third-party cookies in Chrome, which Google rolled out on January 25, 2021:

“Advertising is essential to keeping the web open for everyone, but the web ecosystem is at risk if privacy practices do not keep up with changing expectations. ​People want assurances that their identity and information are safe as they browse the web.

That’s why Chrome introduced the Privacy Sandbox and, today, shared progress on their path to eliminate third-party cookies by replacing them with viable privacy-first alternatives, developed alongside ecosystem partners, that will help publishers and advertisers succeed while also protecting people’s privacy as they move across the web.”

Here is how companies use these third-party cookies to identify people: 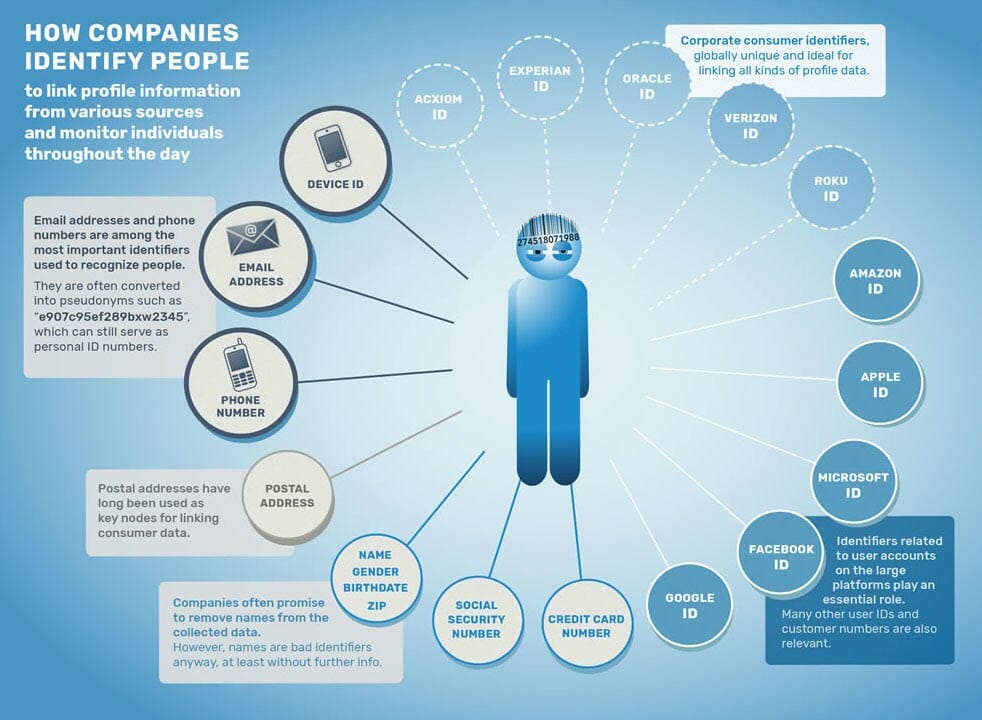 The privacy issues surrounding the use of third-party cookies – cookies that are generated by websites, such as retailer ads, other than the one you are currently visiting – are nothing new: 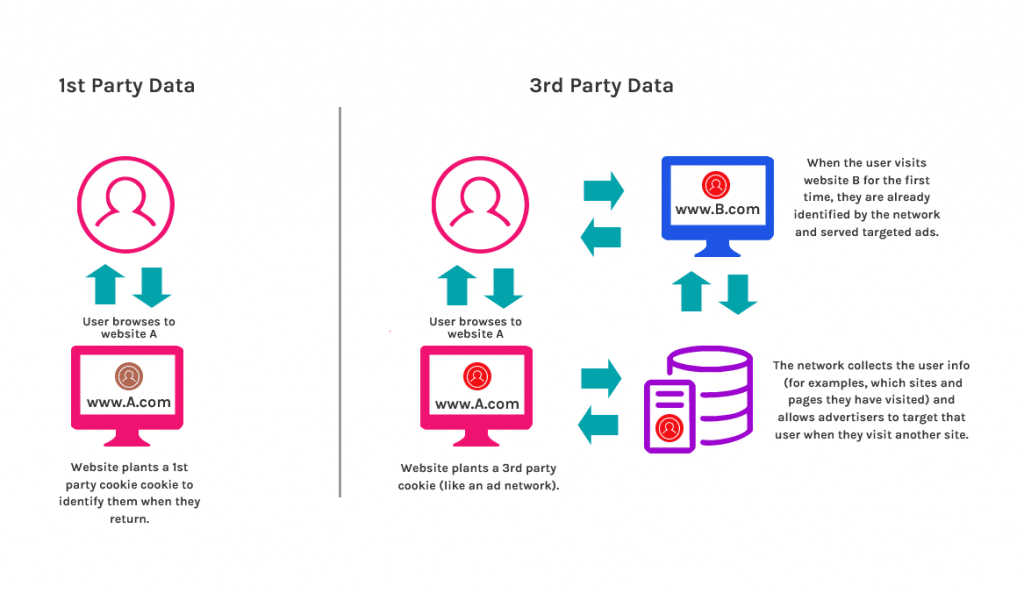 The data collected by these tiny scraps of code beams a huge range of information about users and their preferences back to third parties, who often sell that data to a range of businesses and individuals.

So why has Google decided to phase out third-party cookies in Chrome? Let's take a look at several reasons.

The market for complex data on individuals is huge and growing. In 2017, data broker (a company that buys and sells personal consumer information for advertising campaigns) Acxiom provided its clients with 3,000 attributes on 700 million people. Just one year later that number was up to 10,000 attributes on 2.5 billion people:

The data collected and sold isn’t just used for targeted ads, it’s also used to target influence on political campaigns and to make decisions on an individual’s suitability for things like credit cards and jobs.

Not only is there a risk of storing all that intensely personal data, but that information is readily available for anyone willing to pay for it, making it a goldmine for doxxers and fraudsters.

Privacy concerns have led to the introduction of new data privacy legislation, such as the General Data Protection Regulation (GDPR) laws in Europe and the UK. However, as with all after-the-fact legislation, GDPR is based on the technology at the time.

Moving to a different system for targeted ads could allow Google to sidestep some of the more restrictive legislation aimed at third-party cookie use.

Another factor of why Google is getting rid of third-party cookies in Chrome is the general increased awareness that people now have of their own privacy and the issues that are more and more common.

Several surveys by the Pew Research Center found that:

Google’s position at the forefront of how we access the web, and how third parties access our data, puts them in a position to become a lightning rod for criticism as more and more people wake up to the dangers of personal data collection.

Moving away from the use of third-party cookies, especially since all their major rivals have already done this (or are doing so), could be seen as an attempt by Google to protect its reputation.

5) The Development of New Ad Technologies

Google, among others, has been hard at work creating new ad targeting options that provide relevant ads without needing to track users on an individual basis.

One of Google's “viable privacy-first alternatives” to third-party cookies is using Federated Learning of Cohorts (FLoC) to hide individual users in larger groups of people with similar interests. This allows ads to be targeted at these cohorts without revealing specific personal information.

The Federated Learning of Cohorts is an API (“Application Programming Interfaces,” which is a type of software interface that connects computers or computer programs) based on an algorithm that points the browser user to various audiences who display similar browser behaviors and interests.

6) Reducing the Number of CAPTCHAs

CAPTCHAs (“Completely Automated Public Turing tests to tell Computers and Humans Apart”) were introduced to guard against bots and spam.

Unfortunately, bot and spam creators can now easily manufacture bots that can solve most out-of-the-box CAPTCHA solutions. The result being that CAPTCHAs mostly just slow down the user experience.

Part of Google’s set of Privacy Sandbox proposals is to create a new alternative to CAPTCHAs as a clear response to user frustrations.

Due to Google’s decision to wait until 2022 to phase out third-party cookies entirely, the Privacy Sandbox is still in its infancy. However, we do know more than we did when it was first announced, such as:

As mentioned previously, the Google Sandbox is still in development and, as a result, we’re likely to get a stream of new updates until its implementation in 2022.

However, we do have a fair amount of information regarding the five distinct APIs that will form the basis of the sandbox:

Related Content: How to Prepare Your Site for the New Google Page Experience Update

Since Google is the market leader in the web browser market, any changes in the way that Chrome uses third-party cookies are going to have a significant impact on the advertising web ecosystem.

Currently, third-party cookies are used to track user behavior and provide advertising that is targeted at the interests culled from that behavior. A prime example of this is products that a user has placed in their shopping basket, but has not actually bought.

Once Chrome stops supporting third-party cookies, there are a number of processes that are currently used to target ads that will stop working entirely. These include:

With the death of the third-party cookie very much on the horizon, the search for alternatives is already underway. This is complicated somewhat, however, by the fact that the Google Privacy Sandbox is still in development, but there are already proposals at this stage: 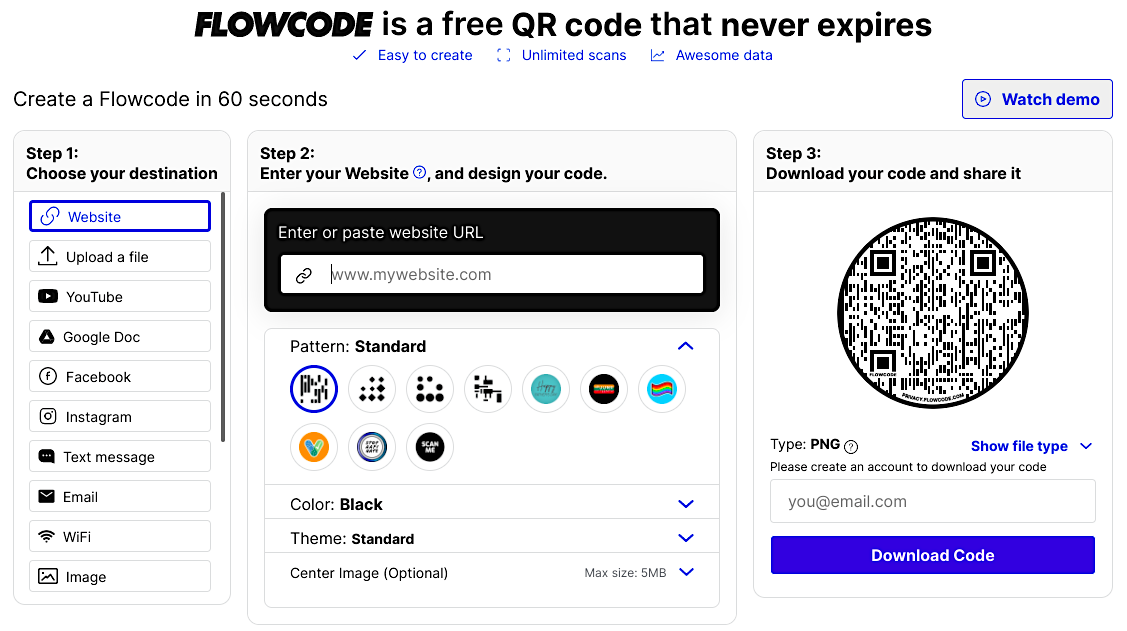 Whether any of these will represent a credible alternative to third-party cookies in the long term is still unclear. What is clear, however, is that new strategies and approaches will be required for advertisers to adapt to this new web ecosystem when it comes online in 2022.

As a thought leader in the digital marketing space, we’ve put together three effective strategies to help publishers and advertisers adapt to the changing landscape of targeted ads.

The first and most obvious strategy is to adapt current advertising processes to fit within the confines of the Google Privacy Sandbox.

Despite the Sandbox still being under development, we do have enough information to make some viable proposals:

The benefit of Google’s timeline is that there is time to develop these aspects of the Sandbox in conjunction with ad tech companies, publishers and advertisers, allowing businesses to create new strategies that work within the new ecosystem.

Diversifying your marketing strategy makes you less vulnerable to shifts in the online marketing paradigm. There are some easy-to-implement strategies that allow you to increase the number of ways in which you can make contact with your intended audience:

Strategy 3: Get Help from Experts

The current disruption caused by the planned implementation of Google's Privacy Sandbox has significantly increased the value of partnering with specialists to overcome this new layer of complexity to online advertising and drive positive outcomes.

Partnering with digital marketing agencies can provide a range of benefits before, during and after the implementation of Google’s Privacy Sandbox, including:

The Future for Targeted Ads

Unfortunately, as Google Privacy Sandbox is still in the development stage it's impossible to accurately predict with any degree of certainty what the future holds for targeted ads.

What can be predicted, however, is that businesses will need to start adapting now to avoid falling behind competitors in the market after the era of third-party cookies comes to an end in 2022.

Plan now for an easier transition, as businesses that start the adoption and innovation process now will be the ones with the competitive advantage when the Google Privacy Sandbox goes live.

Given the uncertainty of the situation, it has never been more vital to partner with leaders in the digital marketing strategy space to help you navigate the uncertain future that the introduction of the Google Privacy Sandbox has created and build solutions that will see publishers and advertisers succeed beyond 2022. 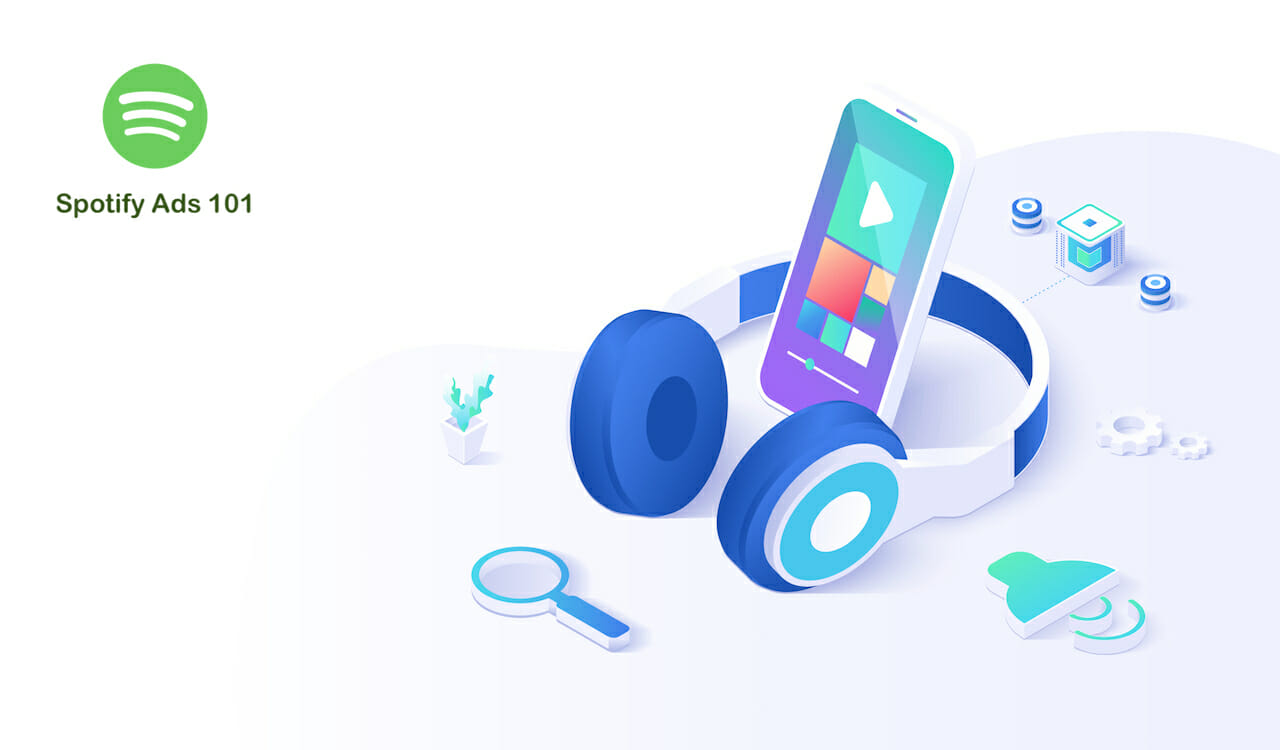 Joydeep Bhattacharya • Jul 29, 2021
Spotify Ads 101: How to Run Successful Audio and Video Ads
Share This Post
Popular Posts
31 Best Digital Marketing Campaigns You Can Swipe
18 Reasons Why Your Instagram Posts Fail (And What to Do About It)
10 Effective SEO Techniques to Drive Organic Traffic in 2021
20 Pre-Production Tips to Create Successful Video Content in 2021
54 Alternative Ad Networks to Open Up New Channels of Growth in 2021
30 Social Media Prompts to Get the Conversation Started
How to Create Instagram Stories Ads that Your Ideal Customer Will Swipe Up
Beginners Guide to Using Facebook Video Chat
42 Digital Marketing Trends You Can’t Ignore in 2021
17 Engaging Video Content Types that People Love to Watch