If there’s any publishing project to keep for content marketers to keep their eye on, it would be Twitter and Blogspot co-founder Ev Williams’ Medium. It’s getting millions of pageviews per month; more interestingly, content originally published on Medium has been republished in national newspapers. The content clearly engages readers. Medium’s product scientist Pete Davies claims that there’s only one important metric that matters:

The aggregate Total Time Reading (TTR) is a metric that helps us understand how the Medium platform is doing as a whole. We can slice that number in lots of ways (logged-in vs. logged-out, new posts vs. old, etc.).

In an increasingly chaotic battle for pageviews today, waged by leaders such as Buzzfeed and Upworthy, advertisers still choose the more consistent, more engaged, alternatives. For example, despite having only a fraction of Upworthy’s pageviews, sites like The Verge are still a more attractive option for advertisers: they consistently reach a demographic with high disposable incomes and a specific interest in technology. Viral sites, despite having more pageviews, are a less obvious fit simply because it’s less clear the demographic and volume of next month’s traffic.

There’s no denying that reach is an important metric; however, engagement is equally essential in building a strong community of readers and prospective customers. Here are a few techniques you can use to engage your readers:

Many of the world’s most significant publications use mechanisms like related posts to increase pageviews and engagement. Related posts are automated systems that look for articles with similar subject matter to display to the reader at the end of the post they’re currently reading.

In order to increase reader engagement, consider having the author or editor personally pick a few related articles for the readers instead of using an automated system. “We found manually created links perform better in terms of driving people to a next pageview,” says New York Magazine’s GM for Digital Media Michael Silberman in an interview with Digiday. “It’s worth the time to have an editor go in and select curated links that drive people forward.”

In this case, human empathy is more effective than an algorithmically driven method of engagement (for now).

The growing popularity of mobile devices means that audiences will no longer necessarily be at their desks when they’re consuming your content. While this requires a bit of adaptation, it also opens up new opportunities for you to connect with them and engage them in more immersive ways.

Monday Notes’ Frederic Filloux highlights a platform consumption chart which details the types of platforms that are most popular during certain times of day. It also highlights the corresponding sorts of content that would be best suited for each platform. Understand that if you’re going to publish a piece during a weekday between 7-9AM, you may want to keep in mind the scores of people viewing on mobile and make the article much shorter and snappier, and less graphic intensive for quicker load times. Similarly, long-form articles shouldn’t be published until work hours, when the majority of people (e.g., the Bored at Work Network) are on their desktops or laptops.

You may also need to display your content using a responsive web solution, which will have a user interface that can adapt to today’s various screen sizes.

Instead of displaying content on different pages, mobile has ushered in scrolling navigation. This is similar to how users behave on feeds in social networks, such as Twitter’s home stream which loads a practically endless feed of content, or Facebook’s mini-feed. Scrolling is much more natural for mobile users, and actually has grown popular on desktop sites as well.

“The infinite-scroll thing, which prevents people from clicking around to navigate the site, is helpful,” said Jay Lauf, Quartz’s publisher Jay Lauf in an interview with Digiday. “It’s easier, and it mimics behaviors of things that are addictive, like Twitter.” The lack of effort required to continue engaging with content is similar to channel surfing. New media companies such as Medium are starting to introduce similar mechanisms, where the end of each piece leads to the headline of the next one. Award-winning site 99U already fully introduced the infinite scroll to their Workbook microsite.

Ever noticed how photo galleries are a consistent method of presentation in almost every popular websites? Photo galleries result in increased pageviews and are an extremely easy way to elicit user engagement. This technique used so effectively by media companies can also be applied to content marketing.

When general contractor discovery company Buildzoom wanted to increase engagement, they did so by using average time-on-site as a metric. In an experiment where they tested the effects of adding a photo gallery for users to browse remodeling work in their area, average time-on-site increased from 1 minute to 2.5 minutes per visitor. As Jiyan Naghshineh Wei writes on Moz, this was also true when he compared news releases with and without images on PR Web: simply by adding images to a news release, average time-on-page increased from 2:18 to 2:47.

Although images can be a helpful tool, they could also backfire by increasing loading times. Ensure they’re formatted appropriately for the web while still looking sharp by optimizing your images with tools such as Image Optimizer. If your’e on the fence about images, consider the increase that images could potentially have on conversion rates.

Design is a crucial element of engaging consumers and prospects. One important factor is typography and font selection. Studies have shown that font selection affects information recall. Fonts like Baskerville make the information much more believable, whereas Comic Sans and Helvetica don’t. When asked for advice, internet marketer Nick Eubanks said in an interview with Blogging Wizard:

Typography. I feel like this is the single most over-looked element in blogs. Even major blogs fall victim to typography and the styling of their text as an after-thought. If the medium is text on a screen take some time to find a reader-friendly font, test your line-height and spacing, make it enjoyable and easy for people to read what you’re writing.

Ad Pushup highlights a few guidelines to follow in order to make the most of your content with typography: keep serif fonts in the title and sans serif fonts for the body, and ensure that your line spacing is 120% of font size. Information Architects’ Oliver Reichenstein has many additional principles. In case you’re curious for a second opinion, run your website through some readability tests.

Additionally, studying reader’s eye movements and adapting the blog layout to these habits could pay off in significantly increased reader engagement.

An engaged reader is exponentially more valuable than just another bypassing pageview. Amidst all the hype to grab as many pageviews as possible, increasing reader engagement can generate a huge return on investment.These five techniques will hook your readers more deeply into your content marketing. 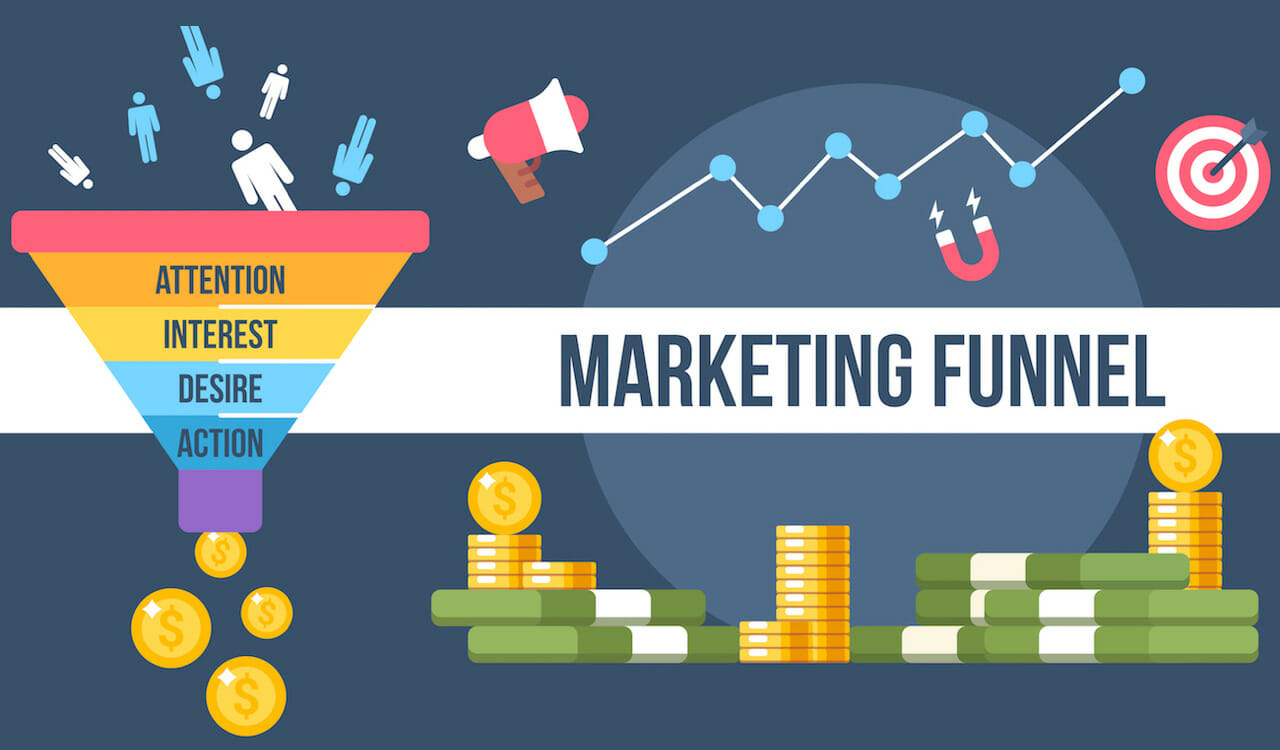 Eric Siu • Sep 16, 2022
How to Create a Powerful Marketing Funnel Step-by-Step
Share This Post
Popular Posts
31 Best Digital Marketing Campaigns You Can Swipe
18 Reasons Why Your Instagram Posts Fail (And What to Do About It)
17 Effective SEO Techniques to Drive Organic Traffic in 2023
20 Pre-Production Tips to Create Successful Video Content in 2023
22 Alternative Ad Networks for Best PPC Conversions in 2023
30 Social Media Prompts to Get the Conversation Started
How to Create Instagram Stories Ads that Your Ideal Customer Will Swipe Up
34 Digital Marketing Trends You Can’t Ignore in 2023
17 Engaging Video Content Types that People Love to Watch
SPEAK WITH AN EXPERT
Great marketing is tough. That's why we're here.
Read this next
Eric Siu • Jul 17, 2013
A Pre-Web Design Checklist: 3 Steps to Responsive Website Glory
Previous Article
ericosiu1 • Jun 21, 2013
A Week of Social Media Insanity
More like this
Joydeep Bhattacharya • Aug 14, 2017
Ultimate Guide to Millennial Content Marketing
Eric Thornton • Jul 24, 2017
How to Use Content to Boost Your E-Commerce Sales
Single Grain Team • May 10, 2013
We’re Looking For A Content Marketing Intern
Single Grain Team • Aug 28, 2014
How Businesses Can Go BIG with Content Marketing
Eric Siu • Jan 4, 2018
How to Use Content Marketing to Increase Qualified Leads
Latest Posts
Justin Caldwell • Jan 25, 2023
GetResponse Review: Is It Worth It in 2023?
Joydeep Bhattacharya • Jan 23, 2023
PPC Consulting: Why It’s Essential for Business Growth
David Borgogni • Jan 18, 2023
Hostinger Review: Is This the Best Web Hosting Provider in 2023?
Joydeep Bhattacharya • Jan 16, 2023
100 SEO Statistics That’ll Help You Dominate Search Rankings in 2023
Joydeep Bhattacharya • Dec 23, 2022
Best Advertising Agency: Top 10 Choices for 2023
Back to our blog